There’s simply no doubt about it – Manila is the largest and busiest city of the Philippines. As per the World Population Review: “Manila is the world’s most densely populated city with 42,857 people per square kilometer, or 111,002 people per square mile… The Metro Manila population swells during the daytime, however, to about 15 million. This density is much higher than that of Mumbai (23,000 people/sq km), Paris (20,150 people/sq km), and Toyko (10,100 people/sq km).” The traffic situation in Manila is legendary – with cars coming to a complete standstill, sometimes for hours. We had been hearing horror stories about the traffic during our 21 day trip to the Philippines (El Nido, Coron, Cebu and Bohol), and I regret to inform that it really was as bad as predicted. 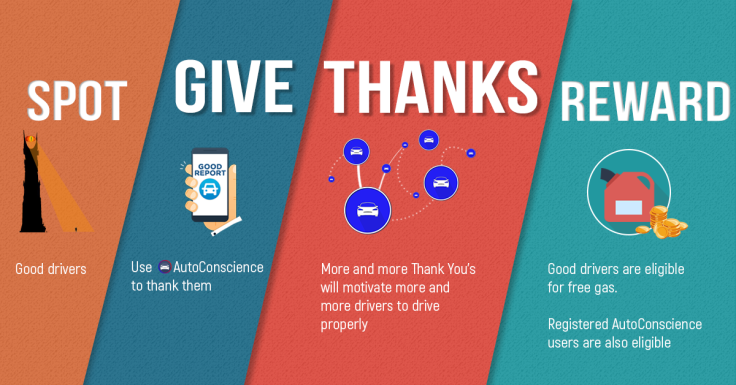 How to get to EL Nido from Manila Airport

Where to Stay in El Nido

With the “ridiculous” traffic situation in Manila, it is not surprising that drivers are stressed out most of the time. “Road Rage” is a common phenomenon and manifests itself amongst the drivers, prompting aggressive behavior, verbal assaults and sometimes even physical harm to the body or to the vehicles. With this in mind, a team in Manila has come up with the fantabulous solution: AUTOCONSCIENCE.

The concept behind this fantastic program is simple: AutoConscience aims to encourage and facilitate better driving, thereby providing a solution to FIGHT TRAFFIC! I mean, how cool is that?

BUT FIGHTING TRAFFIC IS IMPOSSIBLE! THERE ARE TOO MANY VARIABLES! HOW DOES THIS CONCEPT EVEN WORK?

It’s simple really! AutoConsicence is designed to play like a game where the user is rewarded for driving properly as well as reporting other good (and bad) drivers. Currently the only means for drivers to communicate are hostile, aggressive methods such as using the horn or using one’s car to cut into a lane.

Since drivers have no means of communicating in a civil manner then it’s no wonder that our roads are not only chaotic but also actively hostile, eg. people blocking intersections, not following the right of way, counter flowing, not allowing other cars to enter their lane even though those cars are signaling, etc. Obnoxious driving behavior causes traffic and leads to a stressful driving experience for everyone.

The key to better driver behavior would be to enable positive communication and feedback to drivers.

AND HOW DO YOU PROPOSE THAT?

AutoConscience enables sending reports directly to the driver in question. All reports are linked to the license plate of the vehicle in question. The service has preselected messages which are easy to select and send (this also precludes the possibility of users sending spam, harassing or hostile messages).

Encouraging simple behavior can have outsized beneficial results. For example, studies have shown that failure to properly use turn signals causes more accidents than distracted driving. AutoConscience, by promoting good driver behavior, would directly contribute to faster traffic in the city. 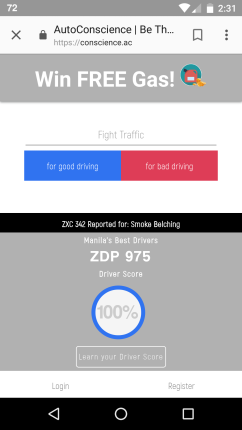 The key is to encourage better driving behavior through the twin pressures of social media and peer validation. Ordinary citizens are frustrated that they can’t contribute to easing traffic – after all not everyone can build roads or enforce traffic or has access to alternate modes of transportation. But with AutoConscience everyone can say thank you to the good driver who used their turn signal or who let them merge into his lane.

THIS SOUNDS VERY GOOD IN THEORY…BUT HAS ANYTHING ACTUALLY BEEN DONE TO IMPLEMENT THIS IDEA?

YES! It absolutely has – and this is where YOU (the citizen, the resident, the tourist, etc) come in! Let’s now talk about how you can actually use AutoConscience – both to MAKE a difference, and mutually BENEFIT from the difference!

You can go to the AutoConscience site HERE or download the AutoConscience Android app HERE . From either the site or app you just type in the license number of the car you want to report and select from a menu of options. All reports are confidential and anonymous. The driver of the car you report will receive your report (if he’s a registered user) but will not see who reported it. We hope that good drivers get thanked for their decent behavior on the road and that this will lead to even more good behavior – easing traffic for everyone.

IS REGISTRATION MANDATORY? IF NOT, THEN WHAT ARE THE BENEFITS?

You do not need to register to use AutoConscience.

If you do register you gain access to all of the reports sent about your car. Perhaps you did not block a traffic intersection and someone said thank you for that or you let another car merge and then said thanks. Registering also makes you eligible for rewards such as free gasoline and allows you to gain levels as a user, accumulating badges and points along the way.

CAN I SEE IF ANYONE IS REPORTING ME AS A DRIVER?

You gain access to that information by registering. Registration is FREE!

HOW CAN WE EXPECT AUTOCONSCIENCE TO GROW?

It’s still early days for the app and the team but already AutoConscience has garnered some positive press. AutoConscience was one of the finalists in the 2017 Startup Summit Philippines and was invited to pitch the idea to Korean investors at Spring Valley, a startup incubator in the Philippines.

I UNDERSTAND THAT AUTOCONSCIENCE WILL BE A BIG HELPING CHANGE FOR PHILIPPINE CITIZENS – BUT HOW DOES IT AFFECT TOURISTS AND TRAVELERS?

Manila is usually the landing spot for the majority of the International Flights coming to the Philippines. Tourists and travelers usually resort to either Taxis, Uber or GrabCar to get to their destinations.

During my 21 day trip to the Philippines, I received my first taste of driver roadrage once we were done with the beach aspects of our trip and had returned to Cebu. Our Uber driver was forced to brake because another car suddenly swerved right in front of him without any signal of any sort.

What followed next was terrifying for us. Our driver began honking at the car and yelling at the other driver to step out for a chat. When the other driver ignored him, our driver started tailgating the other car with the occasional bump. he started driving in a zigzag motion and speeding up suddenly whilst he chased the other car down until finally catching up with it. He then jumped out, confronted the other car and punched down the car bonnet a few times in this agitated state, whilst screaming. He only stopped once he saw me take my phone out.

Needless to say, this left us with a very sour taste in our mouth. Being the helpless and unwilling passengers of a roadraged driver would never be cause for celebration – quite the opposite, this was not what we had come to Philippines for!

What is interesting is that he actually stopped once he saw me taking my phone out – that was all it took. Imagine how much more civilized his reactions would have been if he was aware of the existence of AutoConscience and all the other users who would be reporting his shenanigans! Feetpin Travel strongly approves of and endorses AutoConscience!

DOES AUTOCONSCIENCE HAVE ANY SOCIAL MEDIA CHANNELS OR LINKS I CAN CHECK OUT?

Of course! Please check out the following links and bookmark them to stay connected!

Also do remember to stay connected with FEETPIN TRAVEL for more updates by joining our FACEBOOK PAGE HERE!

Questions? Comments? Feedback? We always love hearing from you!

This post was written in collaboration with the team developing AutoConscience and Alcoves PH. Feetpin Travel was also kindly hosted at Alcoves Apartments – GreenBelt, Manila.